I so enjoy finding recipes that accomplish more than one task in one step!  It's a two-in-one recipe!  Today's feature recipe is one of my mother-in-law's (I have her permission to share with you today) - this is one dough, split in half and thereby creating two scrumptious treats!  You could have the cinnamon buns for dessert and then have the rolls as a side dish for dinner!

Begin by warming the water and milk in a medium size saucepan (on medium low heat).  Warm this liquid mixture until it reaches 120 degrees F and no warmer than 130 degrees F.  Remove from the heat immediately.  Quickly pour the warm liquid mixture into a separate bowl and dissolve the yeast packet into this mixture (I sprinkle the yeast on top and set it aside until the yeast is bubbly and frothy.  My mother-in-law stirs in the yeast but just barely - you can stir too much).
After the yeast has dissolved and become bubbly (and in a large mixing bowl), add 2 cups of the flour and the remaining ingredients (egg, butter, sugar and salt).  Combine using an electric mixer on medium speed.  The dough will be very sticky at this point.  Add 1/2 cup flour and use a wooden spoon to stir.  Dust flour onto a pastry board or clean flat surface and scrape the sides of the bowl to get all the sticky dough out of the bowl.  Now you will knead the remaining flour into the dough.  Sprinkle 1/2 cup of flour at a time on top of the dough blob and knead until all of that flour has been combined.  Add the next 1/2 cup of flour and knead.  Pat the dough ball and if the dough still sticks to your hand then you will need to add a little more flour (1/4 cup or so) - knead that in if necessary.  Your dough ball should look like the picture below.
Butter the sides of a different mixing bowl and place your dough into that bowl.  Cover bowl with plastic wrap and place the bowl in a warm dry place for 1 hour.

After an hour the dough should have doubled in size (see picture below).
Punch the middle of the dough and it will begin to sink - allow the dough to rest for a few minutes.  Cut the dough in half - one half will be made into dinner rolls and the second half into cinnamon sticky buns.

Melt 1/4 cup of butter and set aside.  Take a muffin tin and spray (or butter) each space.  Take the dinner roll portion of the previously made dough and cut it into 12 equal parts.  Using one of the 12 parts at a time - divide each twelfth portion into three small balls of dough.  Roll each dough into the melted butter and place them in a section of the muffin tin (see picture above).  Continue until all the dough has been used (and all of the muffin spaces have been filled).  Place the filled muffin tin in a warm dry space for an hour.  The dough will rise again (see picture below).

Bake in a preheated 400 degree oven for 10 to 15 minutes or until desired golden brown color is achieved (do not overbake - they can darken very quickly).

Cool on a drying rack, serve & ENJOY!
(you will notice how easily the roll thirds will bread apart (see picture above).

First make the sticky sauce below before rolling out the second portion of the dough.

Roll out the second portion of the dough on a lightly floured surface.  Spread the dough with soft butter (see picture above).  Sprinkle the buttered surface with cinnamon sugar (see below).

Begin rolling the dough at the long end and continue rolling (see picture above).  Slice the roll into 12 equal rounds (see picture below).

This sauce is very finicky - if the heat is too high it can burn very quickly.  Or, if it is cooked too long it will become crunchy.  That being said, melt the butter over low heat - add the brown sugar and corn syrup and continue stirring all the time.  The sugar will dissolve but continue heating and stirring until the mixture thickens a little.  You do NOT want it to be the consistency of real caramel - it must still be pourable, but at the same time not runny.  Remove from the heat and stir in the vanilla (see picture below).

Line a round cake pan with parchment paper (the pan I used was heart shaped).  Pour the sticky sauce that you just made into the parchement lined pan.  Sprinkle the nuts on top of the sauce (see picture below).

Now place the cut cinnamon bun rolls on top of the sauce and nuts - evenly spaced (see picture below).

Place pan in a warm dry spot to rise again for an hour (see picture below).

Bake in a preheated 375 degree oven for 18 - 30 minutes - or until desired golden brown color is achieved (see picture below). 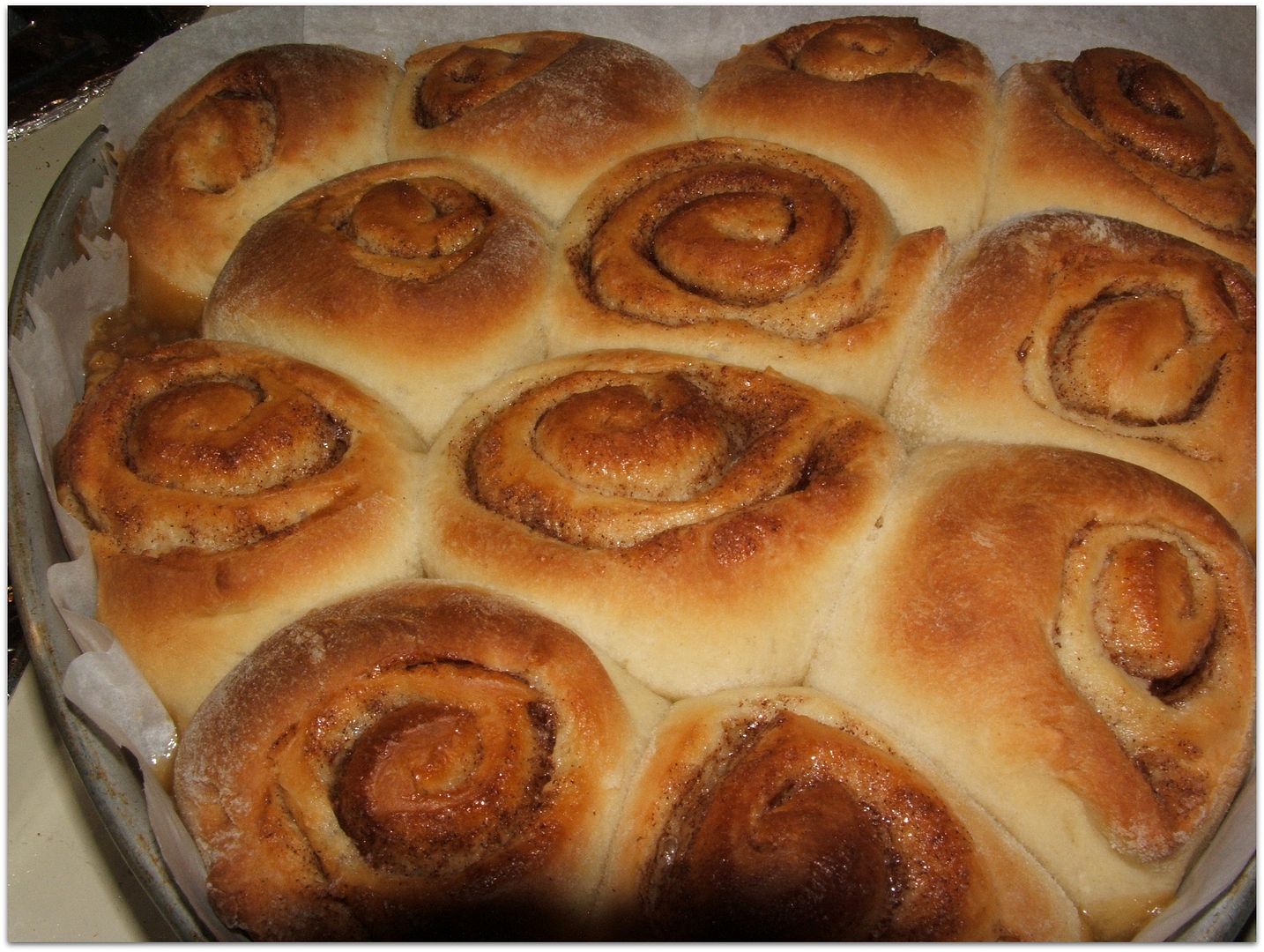 Allow the buns to cool in the pan on a wire rack for at least 10 minutes before inverting.
After 10 minutes - invert the pan, lift off (and remove) the pan and then slowly and gently remove the parchment paper (see picture below).

Grow your own!
Many wonderful garden products from
"Mary's Heirloom Seeds"!!
click to view

Posted by AngieOuellette-Tower at 12:00 PM

Checkout My New Video Channel! I just started a RUMBLE channel.  I hope that you will visit and if you do, please consider subscribing and/o...