The Great Blog Train #8 and Giveaway!

All Aboard!!!
The Great Blog Train

A monthly blog hop departing from your online train station on the first Wednesday of every month!

There are many ways to enter & then don't forget to link up to the train below!! 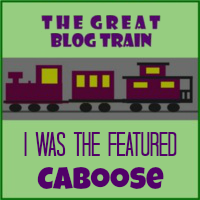 Remember to join the fun even if you are running a little late.  The last entry will receive the Caboose Feature!

July's caboose and featured blog happens to be:


Nicole at  Life with My 3 Boys!  Congratulations!

1. Follow all three of the hostesses in at least one of the following ways: GFC, Twitter, Pinterest, Bloglovin, Linky, Networked Blogs, or Facebook. Then leave us a comment telling us how you followed so that we can come back & visit you! The hostesses are:

2. Now link up your family friendly blog to the train...please only use your homepage, NOT a specific post! As you see below, we are quite serious about this rule:

3. And last, but not least, connect to the boxcar in front of you (the blog in the linky just before you). Stop by that person's blog, have a look around and leave a comment letting them know that you stopped in!

Now that you have your ticket you are
ready to board the rest of the train!


OPTIONAL:You may grab our “Great Blog Train” button and post it on your sidebar or link page.
Also, feel free to spread the word – the more the merrier!

Linked to:
Adorned From Above
Thursday Favorite Things


Please checkout this month's wonderful Sponsor!!
LuAnne from "Winterpast Moments" has a wonderful blog full of the most scrumptious recipes you'll ever see, amazing pictures, and faith filled inspiration!!

(Please click on the ad above)
Posted by AngieOuellette-Tower at 12:01 AM

A Decade of Blogging Bible Studies & Worship - SEPTEMBER God is so awesome!!  I have been blogging for 10 years and I am so thankful to ...