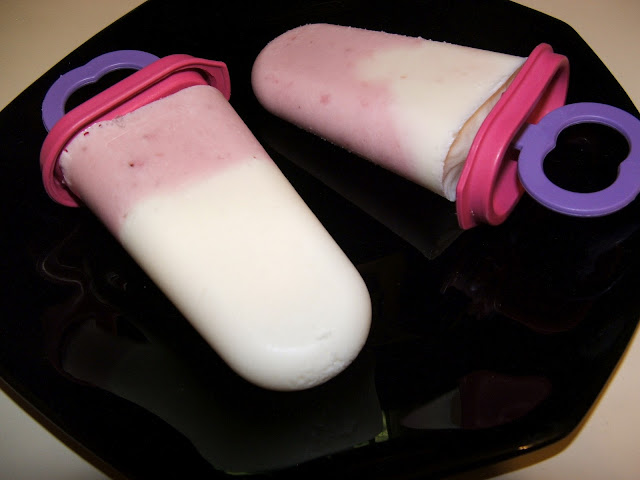 I created this recipe because my husband always complains when I make my Peppermint Patty Pudding Pops  - ( he does not love chocolate like I do).  So, I came up with this flavor combination: Strawberries & Vanilla Cream.  I used sour cream because I like the tart taste that it adds to the already tart strawberries but you may substitute Greek yogurt if you prefer. 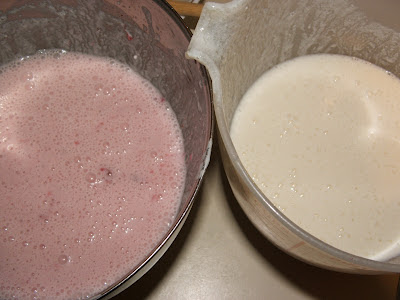 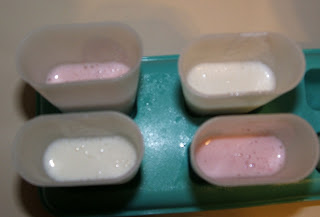 Open both packages of Gelatin and soak in 1/2 cup water (room temperature) and put aside.
In a medium saucepan, bring the milk & sugar to boil (stirring all the time). Remove from heat and stir in the gelatin mixture (stir until completely combined).
Now slowly add the sour cream and vanilla and stir until combined and set aside (if you are using yogurt instead of sour cream you must allow the milk mixture to cool a little before adding the yogurt).
Puree the strawberries in a blender.
Now - divide the sour cream/milk mixture (that you just finished heating) into 2 equal portions.  Put one half aside and to the other half add the pureed strawberries and stir until combined.
I like to layer the 2 flavors (as you can see by the smaller picture above) - I put some strawberry liquid in the bottom of the Popsicle mold - freeze for 5 minutes and then I top that with the vanilla layer to give it a pink & white flare (as seen in the first picture above).  After the second layer place the filled molds in the freezer for at least 3 hours.  If you have any leftover or extra vanilla or strawberry liquid - then pour into small containers (such as ramekins) and eat with a spoon after frozen (you might need to let it soften at room temperature for 5 minutes if you do it this way).
Substitutions:  Any berry or fruit may be substituted for the strawberries - for example:  peaches are wonderful in this recipe also!