Bible Version Discrepancies #3 - THE NEW MAN (Ephesians 4:17-32)
For most of my life I have been afraid of the "King James Version" of the Bible.  I always thought that it would be like reading Shakespeare - well, it's not.  Most of the time on my Sunday blog posts I referenced the N.I.V. (New International Version) but recently, when I need clarification, I refer to the K.J.V. (King James Version) and the N.K.J.V. (New King James Version).  In making this small switch I discovered that there are many serious discrepancies between NIV & The King James versions.  I also found out that the Bible "scholars" who compiled NIV were members of secret societies.  Whether or not there was anything nefarious behind the NIV translation does not affect the goal that I have for this series.  We are going to use our God-given common sense to compare these versions and come to our own conclusions.
It is important to note that the King James Version was first published in 1611 and it wasn't until 1978 that the New International Version was first published.
Even if we find serious discrepancies by comparing these two versions, I want you to know that I believe God has still been able to get His message across to us - He is not fazed by "misinterpretation".  His Truth fills our heart and that is why we are able to objectively study and compare these versions without losing God's meaning.
In this series we are going to really dive deep into God's Word.
We continue our comparison study with "Ephesians 4:17-32".
Unlike the first two posts in this series, there was only one "capitalization" discrepancy.  In the past two posts, one of the first shocking differences I noticed was the grammar in N.I.V. - it is very disrespectful.  Many words describing or referring to God or Jesus are NOT capitalized in the N.I.V..  Modern grammar rules have become relaxed in everyday life but that does not mean that this should apply to the Holy Bible!!
We begin with the differences in the chapter subtitles.  In the N.I.V. the subtitle for Ephesians 4:17-32 is:
"Instructions for Christian Living"
Whereas, in N.K.J.V. the subtitle for Ephesians 4:17-24 is:
"The New Man"
(these can be seen in the first picture seen below).
N.K.J.V. split the featured Scripture into two different portions.  The second subtitle (which does NOT appear in N.I.V.) is:
"Do Not Grieve The Spirit"
(seen in the second picture below)
This second subtitle in N.K.J.V. is so important, and as we go into more detail you will see why.
Color code meaning in the pictures below:
Highlighted in yellow means that those words/sentences do not appear in one of the versions (including when references to God or Jesus appear in lower case rather than upper case)
Highlighted in orange means that the meaning of the word comparison was very different
Highlighted in green means that the meaning of the word comparison was similar or the same. 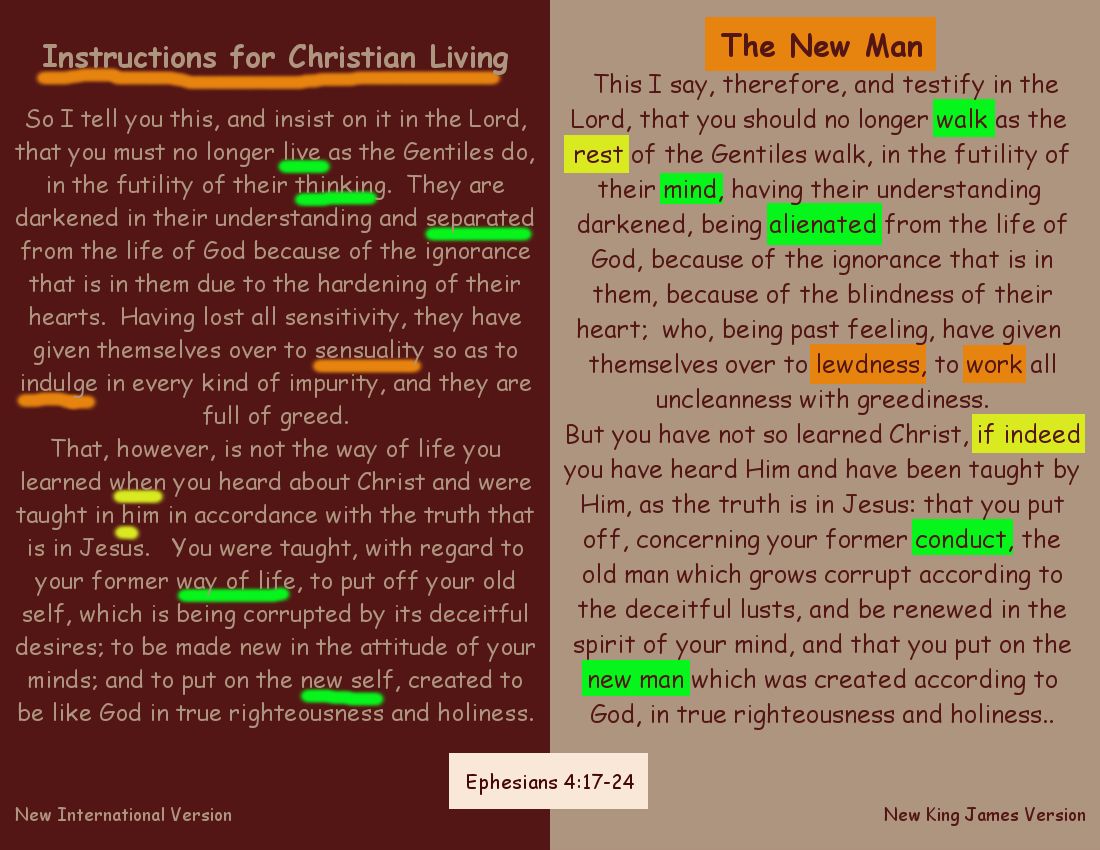 The following are the words that I highlighted in green in the above picture, meaning that they have similar meanings:
live = walk
thinking = mind
way of life = conduct
new self = new man
You will notice that I did not include "separated" and "alienated", that's because even though they are similar - I feel that alienated is a much better description.
Separated - to set or keep apart.
Alienated - feeling separated or withdrawn from others or from society as a whole.
The word "alienated" is so much more descriptive of what it would be like to be "alienated from the life of God" - desolate, absolute loneliness, void of belonging.
Now let's focus on the orange highlights in the picture above:
sensuality vs lewdness
indulge vs work
Sensuality - relating to or consisting in the gratification of the senses.
Lewdness - obscene, vulgar, evil, wicked.
There is a huge difference between those two words.  To me, the word "sensuality" is a watered down version of "lewdness".
Indulge - to yield to the desire of.
Work - to perform or carry through a task requiring sustained effort or continuous repeated operations.
"To work all uncleanliness with greediness" implies that there is a continuous evil corruption.  Whereas, "indulge" implies temporary or maybe only one time (I agree, doing evil only once is still bad but the word "work" seems to emphasize the moral of the story better).
Now let's focus on the few yellow highlights in the picture above.  I highlighted "rest" because we have to remember that Jesus came to save the Gentiles as well as the Jews.  The use of the word "rest" means that some Gentiles were already living for Jesus - it is the old way of living by the Gentiles that is to be avoided.
Then, the N.I.V. does not use "if indeed".  I believe that Paul is referring to the "fake" Christian - "if indeed you learned from Jesus".  The actions of some of the Ephesians must not have glorified Jesus, which is why Paul gave this caution or rebuke.

The following are the words that I highlighted in green in the above picture, meaning that they have similar meanings:
members of one body = members of one another
foothold = place
get rid of = put away from you
compassionate = tenderhearted
Now let's focus on the orange highlights in the picture above:
falsehood vs lying
angry vs wrath
useful vs good
share vs give
unwholesome talk vs corrupt word
building up vs edification
with vs by
slander vs evil speaking
I won't go through every one in detail - some are obvious like "useful" vs "good".  "Useful" is not always good - what is useful to an evil person is not good.
And "falsehood" seems like a word that belongs in the King James Version - it's just Shakespearean and "lying" is much more simple (I don't see why "lying" had to be changed in the 1978 N.I.V.).
The reason I included "wrath" is because I loved the meaning "Divine chastisement" or righteous indignation.  An example of "wrath" is when Jesus turned over the merchants tables because they were selling in the Tabernacle.
Sharing could mean that you are providing a penny from one milling dollars - you shared a "portion".  "Sharing" is not necessarily selfless.  Whereas, "giving" implies providing everything or as much as is needed to solve the problem.  This subtle meaning difference is also similar to "unwholesome talk" vs "corrupt word" - unwholesome could be so minor but corrupt is never minor.
Building up - to promote health, strength, esteem.
Edification - Intellectual, moral, or spiritual improvement.
Another huge difference in meaning.  "Build up" is another watered down version of "edify".
The difference between the word "with" and "by" is gigantic.  In the picture above, the most serious warning from Paul is: "do not grieve the Holy Spirit."  Before I detail the difference between "with" and "by",  I need to refresh our memories about being "sealed."  When we become Christians, the Holy Spirit is sealed in our hearts.  I think of it like the 17th century practice of sealing an envelope - in that era there was a wax stamp on the outside of a letter/envelope.  Our hearts are sealed or protected and can ONLY be opened by God.  The use of the word "with" implies that we are equal or had some part in doing the sealing.  Whereas, "by" implies what I believe to be the correct meaning - Divine protection - "we" had nothing to do with the act of sealing.
Finally, to not include "impart grace" is so horrible.  Everything about our "new man" or our "new self" in Jesus Christ is about "grace".  It is by grace - this free gift of forgiveness through Jesus Christ our Lord and Savior that we have become a new person - without that "grace" we are nothing.
I pray that you will continue to reflect on these differences this week and never stop digging deep into God's Word.
Previous Version Discrepancy posts:
The Lord's Prayer
Messiah's Reign

Posted by AngieOuellette-Tower at 4:00 AM