Features From The Toledo Museum of Art #21

Features From My Visit to: The Toledo Museum of Art - #21

TMA (Toledo Museum of Art) is one of my favorite places in Toledo, Ohio.  I first visited this beautiful museum when I was in high school in Canada.  I grew up in the Windsor area and I was privileged to go to a high school with an advanced art program.  We actually visited the TMA twice throughout my high school career.  I had no idea when I was a teenager that I would actually marry an American and then settle in the Toledo area!  I now visit my favorite museum once a year.

I will be featuring a few pieces from the TMA each month. 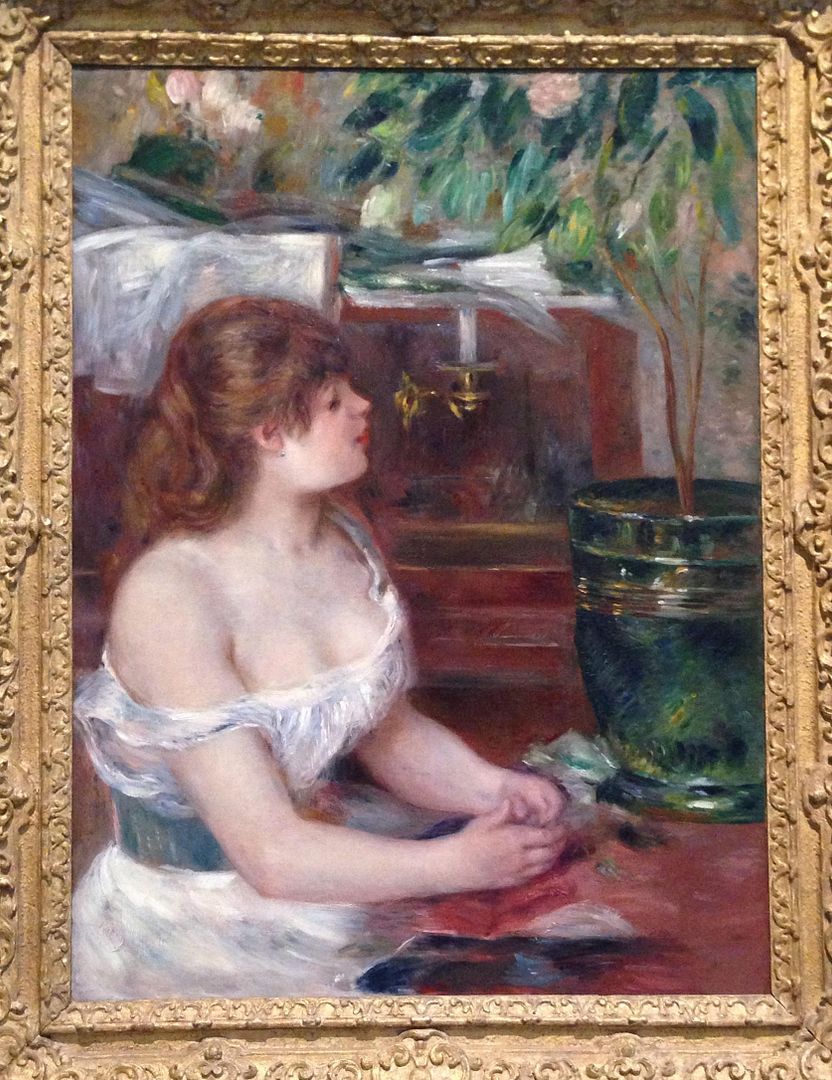 “The Green Jardiniere”
(Oil on canvas)

We continue focusing on my favorite style of Art: Impressionism.  This style of art began after the camera was invented and Impressionism captures split second, everyday life of normal people or simple everyday scenery.  If you were to quickly open and close your eyes - it's that fuzzy snapshot of that one second that is depicted in these masterpieces.

This masterpiece is best described by the write-up pasted from "The Toledo Museum of Art" website:
"Like his landscape Road at Wargemont, Pierre-Auguste Renoir’s Green Jardinière features jewel-like tones and fluid brushwork. The young woman who sits opposite the large planter of the title, the strap of her dress provocatively slipping off her shoulder, is Aline Charigot (1859–1915). She was a seamstress who frequently modeled for Renoir. They began to live together in 1882, the same year Renoir painted this portrait, and eventually married in 1890. Renoir made another version of the painting, which differs in the size of the figure and the addition of a cat.

Made around the time that Renoir had achieved enough success with his portraits to be free of earlier financial worries, it nonetheless contains an element of thriftiness: he recycled the canvas, painting this image over a still life by another, unknown, artist. "

Other TMA Posts:
Church Stained Glass
"Hazy Day on the Marshes"
"A Dutch Road"
"Rainy Day, Boston"
Tiffany Chandelier
"The Open Air Breakfast"
"The Scottish Highlands"
"The Country Gallants"
"Morning Glory Chandelier"
"Interior of Courtyard, Strandgade30"
"Early Puritans of New England Going To Church"
"White Terrier"
"Winter Landscape With a Bird Trap"
"A Rainbow Like You"
"Landscape with Christ and the Woman of Canaan"
"Christ and the Centurion"
Mosaic with Imago
"Tiichum"
"Peasants Resting"
"The Glade"

Many wonderful garden products from


Posted by AngieOuellette-Tower at 3:00 AM